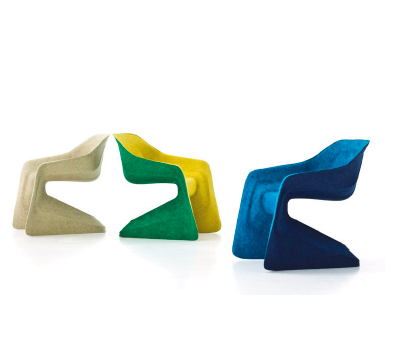 Studio Aisslinger is based in Berlin and was founded by the German designer Werner Aisslinger. His works cover the spectrum of experimental, artistic approaches, including industrial design and architecture.

He seeks to use the latest technology in creating his designs and has helped introduce new materials and techniques to the world of product design. The stackable monobloc hemp chairs are made from hemp and kenaf, which are both renewable materials and have been designed for a lightweight eco friendly manufacturing process.

I visited 19 Greek Street a new gallery space in Soho at the weekend as part of the London Design Festival. This exhibit of a ‘living’ chair structure was fascinating. The chair is positioned in a greenhouse complete with soil.

Studio Aisslinger describes the exhibit as the beginning of new life:

“This laboratory-like stage setup promises to be as spectacular as watching a dinosaur hatch from its egg: A chair is born from a steel corset! The only difference to the egg-comparison is the fact that the shell of the “chair farm” prototype is inside the chair’s structure instead of being outside.”

After the removal of the metal structure – described as the “corset”, the unique chair is revealed. The greenery has grown into the mould to form a structure akin to a chair.

“The chair is no longer produced in the classical sense of the word. Instead, it grows of its own volition in a greenhouse or on a field. When it has reached maturity, the steel corset is opened and removed, revealing a naturally grown chair. The title of the project by this Berlin-based designer, who imagines huge “product plantations” in the future, reflects this utopian means of production: the “chair farm””.