The sleek design of the Narvik chair does not fit into the stereotypical image of eco furniture. It’s sturdy elegant build is that of a piece usually found in a modern gallery.

Carboard Concept’s unique designs and advanced use of cardboard allows them to create eccentric and simple shapes built to last.

All their products are fully handmade allowing every piece to meet their high standards of quality.

Michael Wolf’s book on ‘Sitting China’ is a simple idea yet it creates a theme which is surprisingly insightful into the world of people living in such a booming country. His photographs show old, modern, broken and creative pieces put together to suit everyday needs. 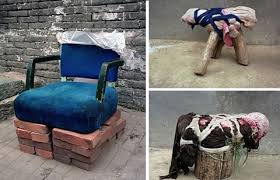 They are not meant to be works of art, they are purely functional. That is how they are intended at least, he photographs chairs that have been fixed and adapted to serve a primary purpose – sitting.

No matter how basic these chairs may be, he has found creativity and characters in objects that are often old and quirky however they are still functional and are put to good use.

While in China he received criticism from people who watched him photograph these often dilapidated and strange looking contraptions. Some felt he was trying to paint China in a bad light.

He tried to explain that he was in fact fascinated by these chairs as they provided far more character than a modern sleek chair. The book appears to be documenting pieces which may seem like art to many people.

It shows different sides of China, it would be unreasonable to assume China is full of dilapidated chairs, but it would also be unrealistic to think that these would not exist in any country.

Chandeliers are often associated with grand old mansions or palaces, beautiful big contraptions lighting up grand halls from high ceilings. With a bit of DIY or accessorising this kind of lighting can make even the tiniest flat sparkle. New designers have taken a modern spin on this traditional way of lighting.

Colours, beads, wires, old clocks and buttons are some of the a features making up these magnificent ceiling lamps. The diversity in style and design makes these features perfect for homes or businesses whatever the size.

Azimut is an Italian company specialising in design of chandeliers based in the hills of Montespertoli, near Florence. Raffaello Nebbiai and Alessandra Antonini design and produce ceiling lamps sconces in special, unique shapes. Beads and colourful glass and crystal decorate these stunning structures. Combined with high quality craftsmanship combining tradition with playful modern styles.

The experimental nature of their creations allows these chandeliers to be works of art as well as having a primary function. The pieces are designed as unique handcrafted chandeliers and are tailored to customers needs. They are a quirky way of decorating spaces and bring vibrant colours to a room giving it plenty of character and setting a great atmosphere.